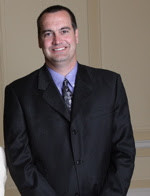 John Hanson was honored for The Coffee Break Debates, a series of debates hosted by his Waseca High Senior American Government classes and broadcast on cable television. He created the debates to help his students learn more about government, specifically local government and its role in the community. Hanson says local government is incredibly important because the decisions the local government makes effect his students’ daily lives.

Hanson’s podcast (MP3, 17MB) covers why the debates are valuable, what the response has been from his students, school, and community, and why he encourages other teachers to do the same for their communities. For example, he says while broadcasting the debates is a great community service, it is secondary to the true objective of the project: to help students “become more knowledgeable about local government and more knowledgeable about becoming an educated voter.”